We hope you have survived January and that things will start to thaw soon!
A Costume Ball
Thank you to all who came out and attended our fundraiser!  The event was exceptionally fun and a great success.  If you missed this event, be sure to keep an eye and ear out for information about next year’s event!  Here is a picture of our costume contest winners (1st Julie and Rod as Lucy & Ricky; 2nd place, Bryce as Steampunk Mad Hatter; and 3rd place Jesse & Marisa as Steampunks): 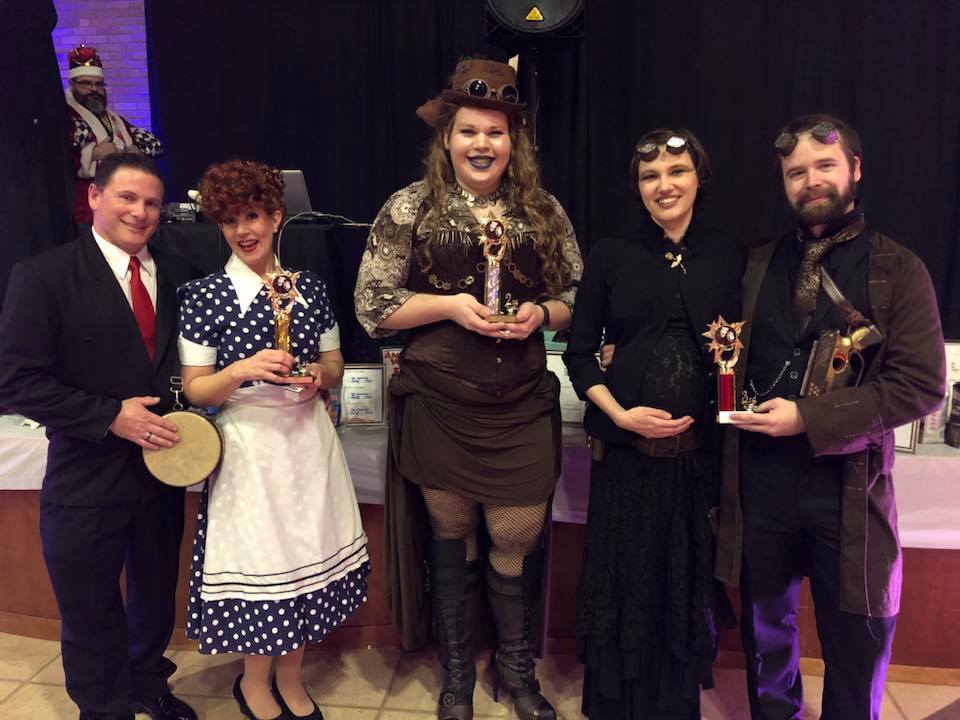 Wine Walk
The Haylofters was able to sponsor the Winter Wine Walk hosted by Rugan’s here in Burlington on February 17th.  The event was a success and we had fun getting to spread the word about our community theater.  Rumour has it that there will be another Wine Walk coming soon and we will be sure to take part so we hope to see you there! 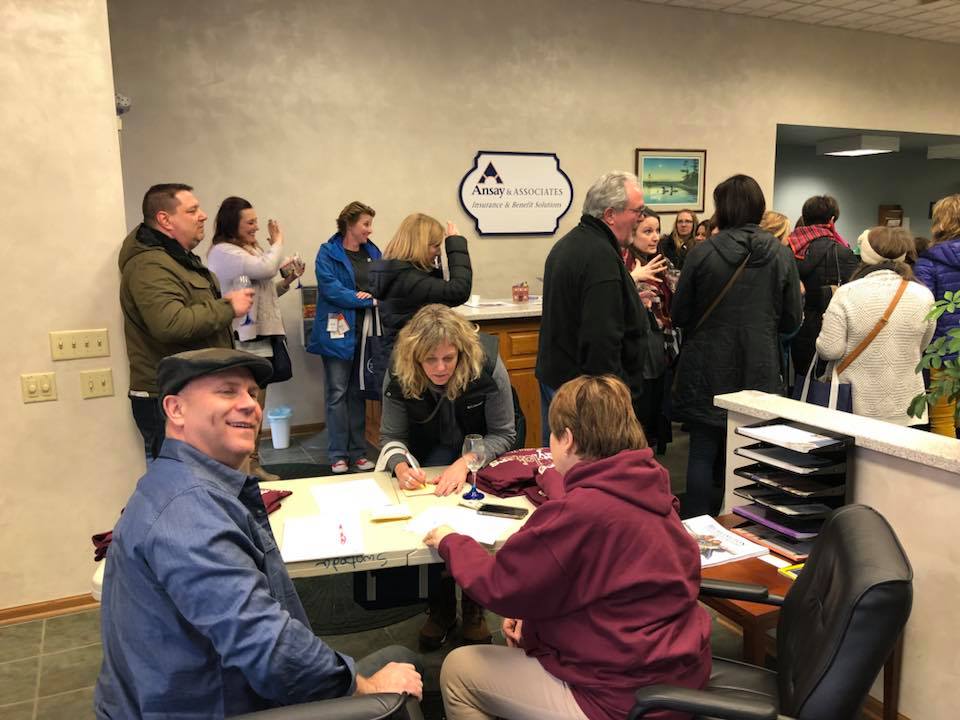 AUDITIONS FOR On Golden Pond – DATE CHANGE!
Auditions will be held for our first production of the year at 7pm on Monday, March 12th and Tuesday, March 13th at The Haylofters.  For more detailed information, check out our website or Facebook event!
Board Changes
Due to an unforeseen circumstance, one of our board members had to step down.  At the February board meeting held on February 21st, Marti Todd was voted onto the board.  Positions have now been updated to:
Vice President – Nina Fiegel
Publicity – Marti Todd
Our 2018 Season
Spring: On Golden Pond        Directed by Julie Patten
Audition Dates: March 19th – 20thShow Dates:  May 10th – 13th, 17th – 20th
This is the love story of Ethel and Norman Thayer, who are returning to their summer home on Golden Pond for the forty-eighth year. He is a retired professor, nearing eighty, with heart palpitations and a failing memory—but still as tart-tongued, observant and eager for life as ever. Ethel, ten years younger, and the perfect foil for Norman, delights in all the small things that have enriched and continue to enrich their long life together. They are visited by their divorced, middle-aged daughter and her dentist fiancé, who then go off to Europe, leaving his teenage son behind for the summer. The boy quickly becomes the “grandchild” the elderly couple have longed for, and as Norman revels in taking his ward fishing and thrusting good books at him, he also learns some lessons about modern teenage awareness—and slang—in return. In the end, as the summer wanes, so does their brief idyll, and in the final, deeply moving moments of the play, Norman and Ethel are brought even closer together by the incidence of a mild heart attack. Time, they know, is now against them, but the years have been good and, perhaps, another summer on Golden Pond still awaits.
Summer: My Fair Lady        Directed by Don Fresen
Sponsored by Runzheimer
Audition Dates:  May 21st – 22nd (Look for more information in the upcoming newsletters!)
Show Dates: July 12th – 15th, 19th – 22nd
When Lerner and Loewe’s My Fair Lady opened on Broadway, it collected six Tony Awards, including Best Musical, while the film version took home eight Oscars, including Best Picture. Based on George Bernard Shaw’s play Pygmalion, My Fair Lady is that rare musical by which all others are measured. The tale of a cockney flower girl transformed into an elegant lady features one of musical theatre’s greatest scores, including: “Wouldn’t It Be Loverly?,” “With a Little Bit of Luck,” “The Rain in Spain,” “I Could Have Danced All Night,” “On the Street Where You Live,” “Get Me to the Church on Time,” and “I’ve Grown Accustomed to Her Face.”
Eliza Doolittle is a young flower seller with an unmistakable Cockney accent which keeps her in the lower rungs of Edwardian society. When Professor Henry Higgins tries to teach her how to speak like a proper lady, an unlikely friendship begins to flourish.
Fall:  Noises Off        Directed by Don Fresen
Assistant Director – Molly Button
Audition Dates:  August 20th -21st
Show Dates:  October 11th – 14th, 18th – 21st
Called “the funniest farce ever written,” Noises Off presents a manic menagerie of itinerant actors rehearsing a flop called Nothing’s On. Doors slamming, on and offstage intrigue, and an errant herring all figure in the plot of this hilarious and classically comic play.
Young Haylofters:  Sally Cotter and the Quest WE Follow
Directed by Paula Lovrine
Audition dates:  TBD
Show dates:  August 9th – 12th, 16th – 19th
Sally has just bought a copy of the final book in her favorite series of novels. But if she finishes reading it, will the magic all be . . . over? As she sleeps on it, Sally once again dreams she’s a student at Frogbull Academy of Sorcery. With the help of Professor Albatross Underdrawers and pals Dave and Harmonica, she must uncover the secret of the MacGuffix and face the evil Lord Murderdeath in a final showdown. Whether you’ve visited Frogbull before or this is your first time in one of Sally’s dreams, this wild satire of fandom, fantasy, and a certain magical book series is the loopy comedy for you.
Bonus/Christmas:  A Charlie Brown Christmas
Directed by Julie Busch
Audition Dates:  TBD
Show Dates:  November 30th – December 2nd
The classic animated television special A CHARLIE BROWN CHRISTMAS comes to life in this faithful stage adaptation, in which Charlie Brown, Snoopy, and the rest of the Peanuts Gang discover the true meaning of Christmas.
*All shows are subject to acquisition of rights.  Final performance dates are subject to change.*
Join the Haylofter Family!
By becoming a member of the theater you gain these benefits:
Membership is $15 per year for individuals and $25 per year for a couple/family.  For more information, please email us at:  hayloftertickets@gmail.com or check out our website!
SEASON TICKETS On Sale NOW!!
2018 Main Stage Season Ticket are $36.00 per ticket
Entitles bearer to the three Main Stage Productions.  Season Ticket holders will receive an email to select individual show dates at the start of each production.
Interested in Being a Patron of Our Theater?
We offer varying Patron levels ranging from Orchestra ($25) to Producer ($500+).  If interested, please contact us at hayloftertickets@gmail.com.
Be Sure to Follow us on Our Social Media Sites to stay up to date!
Facebook
Twitter
Instagram
This Month’s Trivia Question:
What building now stands in the original location of the barn that housed the beginning of The Haylofters?
Last month’s answer: 1978  (check out some photos here: My Fair Lady 1978 – Photobucket)
Related posts